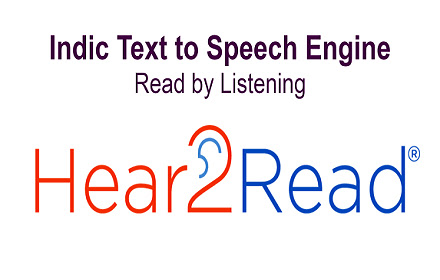 The H2R Speak plugin is avaliable in the Microsoft Edge Add-ons Store here.

H2R Speak is a small plug-in from Hear2Read.Org that reads Indic text by speaking. It uses the Hear2Read Text to Speech engine (TTS Assistive Technology for users with Visual Impairment that reads digital text aloud) running in a Cloud Server through the Internet.

The plug-in can be used by anyone (users with normal sight or visual impairment, including Dyslexia) to read web pages with Indic text and some embedded English text. It currently supports the following Indic languages:

Once the extension is installed and pinned using the Pin option for extensions, the Hear2Read icon (

) is displayed in the top right corner where all pinned extensions icons are displayed (to the left of the 3 dots for browser settings).

H2R Speak allows users to selectively turn it on for just one site or all sites. Clicking on the icon displays a drop-down menu. Click on “This can read and change site data” to display three options:

H2R Speak reads one sentence at a time by sending the text to the Hear2Read TTS cloud server which sends the audio back to the PC for playback. As such, the pause between sentences can be longer if the next sentence (to be read) is long. The end of sentence is determined by a:

The sentence that is currently being read is highlighted in blue.

Useful for many different users

H2R Speak is designed to be used by Visually Impaired (VI), as well as, users with normal sight that have non-visual impairments or simply want to read by listening. Examples of non-visual impairments include Dyslexia, speech impairment due to ALS or surgeries. It is also useful for users who are unable to read a particular language but understand spoken words.

The commands to toggle between these two modes are described below. Whenever the user toggles from Cursor mode to Page mode, H2R Speak starts at the first sentence of the web page.

In page mode (only) the highlighted sentence being spoken can be changed as follows:

Once the desired sentence to read is highlighted (selected), press <insert> p to resume speaking.

The following buttons are visible in page mode:

The following buttons are visible in Cursor mode:

The following configuration is saved in the browser and used for all tabs/windows:

Configuration options are saved even if all browser tabs & windows are closed.

Browsers prohibits access to locally stored (on the PC) files by extensions. Therefore H2R Speak cannot be used to read web pages or html files saved on the PC. You may be able to use an extension to override this security restriction.

Certain web sites (for example all BBC web sites) instruct the Browsers to not allow exporting content to third party cloud servers (such as Hear2Read TTS server). Such web sites cannot be read by H2R Speak.

Hear2Read volunteers hope you find H2R Speak useful. We will love to hear from you. Please send your positive and constructive feedback to feedback@Hear2Read.org.